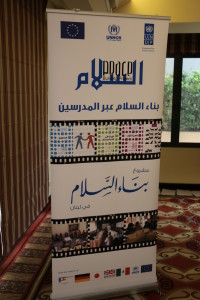 Phase II of the project was The Educator’s Workshop.

In phase II, teachers and supervisors from 14 different schools from the eastern and southern suburbs of Beirut, were trained on ways, tools and activities that are meant to help in managing conflicts and decreasing violence in the schools.

In addition to this training workshop, the blue prints of a big project aimed at spreading the culture of peace in all targeted schools was developed.

…For Development sat down with the educators involved in the workshop, right after they were awarded a certificate by the UNDP for their participation, to explore with them their overall impression of the sessions being held:

Inaam F. said that in this workshop about conflict resolution, it was important to understand conflict and struggle, and what’s the difference between them. It was important to understand anger and violence, and also what’s the difference between them. “Only the first two days were theoretical, then we went on to recreate the conflicts that happen in our schools.” 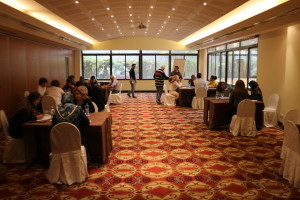 Maryam F. added that what was important was to identify the structure of interference in the conflict, as opposed to the previously unstructured approach. “You could also say that this strategy is a preventive one, because after you identify the cause of the conflict, you can fix it in a way as to prevent conflicts arising from similar causes from happening again.”

Michel S., an author of a book of poetry, one that he distributed to the trainers at the end of the workshop, was poetic in his words when describing the workshop itself. He said that in the workshop that was meant to build a culture of peace, “we started talking about the schools and ended up talking about humanity.” In the practical part of the workshop, we lived the situations as if they were real life. “We were not pretending anymore, and so the solutions we came out with in the end were genuine; I’m sure they’ll work.” 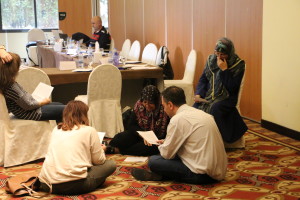